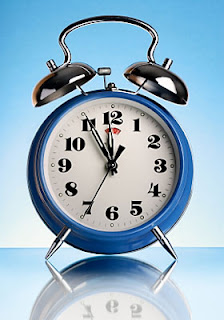 I think one of the most important things that's kept me motivated in writing my first novel is setting a timeline for the things I want to accomplish in this endeavor.

When I made the concrete decision to sit down and give this whole book-writing thing a serious try, I was dubious. I've mentioned before how I have trouble completing long-term projects (a hallmark of attention deficit disorder, I still need to contact someone about the royalties for all those posters I should be on). When I knew I was serious about giving this a try, I sat down and planned out a loose timeline for what I wanted to accomplish.

I decided to give myself nine months to complete the first draft. My writing hero, Stephen King, says in his book On Writing that he finishes a draft of 100,000 words in three months - that's cranking out about 2000 words a day, every day, with no breaks. Of course, Mr. King only has one job - making things up and writing 'em down. He doesn't have to deal with another full-time job like I do. Also, he has this whole book-writing thing down to a science. Since this is my first book, I decided to give myself more time than he recommended, mainly so I wouldn't kill myself with my own project.

After setting a date for first draft completion (the first of May), I looked at what else I wanted to do with the book. I want to give it four to six weeks to rest in the proverbial bottom drawer after it's complete, so I can go back to it and edit all its pages with a fresh eye. So that puts me in early to mid June before I can even look at it to begin the second draft (but it's all right, I have a few short stories rolling around in my head to keep me out of that bottom drawer for a few weeks). I'll give myself about a month to go back through and clean it up, add in the things I want to add (there are several bits of foreshadowing which need to be put in, to sort of spice up the story), change what needs to be changed.

So around July 15th, I'll get a few spiral-bound copies of my manuscript printed, and I'll be handing them out to a few dedicated First Readers. I've picked out a handful already, each of them with a different skill set for looking at the book. One of them, of course, is my writing compatriot and fellow Reedy River Rat Gail Gray, who has offered invaluable advice and direction during the process of creating the first draft. The other readers I have lined up are from varying backgrounds, education levels and mindsets. Each of them has been chosen to read for one reason or another - one person I want to focus on theme, one on setting, one on that terrible issue of romance I talked about yesterday... and they're all excited as hell to read my book.

I want to give them a month to read, then start gently prodding for returns (hopefully with lots of notes in the margins). So, mid-August will be the beginning of the third draft and subsequent revisions. I'll give myself another two to four weeks to get those done, and then start drafting query letters for agents and publishers. By September 15th or so (a couple of weeks before my birthday), I want to have a finished package ready to send out where it needs to go.

And then a month later, the South Carolina Writers' Conference will meet in Myrtle Beach, SC. There will be agents and publishing houses represented there, so I'm going down there to shake hands, network, and hopefully meet someone who can help me get my foot in the door to get my baby - now grown into a big, strapping, stand-on-its-own novel - looked at by a publisher. Gail and I are already planning our trip, and I'm excited about it!

When I saw all this laid out on a timeline back in August, the structure of the plan made me feel as if I had a real chance of finishing this project. It's something I return to on an almost daily basis to help remind myself of what I'm working towards. I need to get this done in a timely manner, so I can ultimately take it where it needs to go in October.

I'm glad the timeline helped keep you straight! I think, like you mentioned, that's key with a long-term project. And I *absolutely* agree with you...throw it all down on the paper first. As fast as you can. Worry about editing later.

Greenville's a great town. :) I grew up in Anderson.

That's awesome! I function so much better with a timeline too. It makes me realize that I can't spend all my time on games and reading.

Sounds like you have a plan and you're sticking to it. Yay!

I totally agree with putting away the manuscript and giving yourself time to "forget" it. It'll feel new when you go back to it.

Nine months is a good deadline. Good luck at that conference.

Good luck on the deadline Becky! I know you can make it!

Sounds like a good plan to me and I'm sure you can do it. Go, go-- I'm one those who is rooting for you.
Lee

I write with a friend in these one hour writing jags. We each started our novels around the same time and set a goal of when we needed to finish. We didn't quite meet it, but we both did finish, so yay!

It does help and thanks for the reminder because I need to do this for my second book.

I think your schedule is realistic.

You know I'm cheering for you!

I am better with deadlines as well but I have no boss and I'm not very strict. In fact, I'm quite lazy if I have no deadlines.

I must enlist The Man to be even more of slave driver. That would help.

I think your goals are extemely realistic and thought out. I like it!