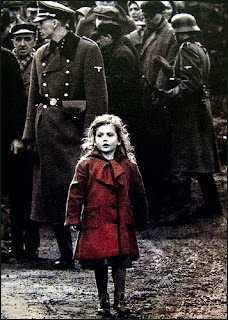 Ever think about how color can affect the theme and mood of your story?

The movie Schindler's List, directed by Steven Spielberg, was almost completely shot in black and white... except for the little girl in the red coat. We see her through Schindler's eyes, standing out in the crowd of Jews waiting to be processed... then later, heaped onto a wagon of corpses, still wearing her little red coat. A lot of people have speculated about what the color red means - perhaps the red symbolizes a lost innocence, or the blood of the Jewish people spilled by the Nazis. But Spielberg himself had this to say:

"America and Russia and England all knew about the Holocaust when it was happening, and yet we did nothing about it. We didn’t assign any of our forces to stopping the march toward death, the inexorable march toward death. It was a large bloodstain, primary red color on everyone’s radar, but no one did anything about it. And that’s why I wanted to bring the color red in."

Or take into account the movie The Sixth Sense, directed by M. Night Shyamalan. He also used the color red repeatedly throughout his film, to symbolize when the spirit world and the real world were brushing up against each other. When Cole sees the ghost in his room, he's hiding in a red tent. At the boy's birthday party where the bullies lock Cole in the attic, he's following a red birthday balloon to the top of the stairs, and he's wearing a red sweater. There are many other examples of this symbolism used throughout the movie.

Is this something we can incorporate into our prose? The repetitive use of color is a subtle trick we can use to help set the theme and mood of our writing. Perhaps a character who's in an abusive relationship always has an example of the color purple around them, to symbolize the color of bruises. Or a theme you're touching on - poverty in Middle America, maybe - can be used to highlight people and places who are affected by this theme. Like, everyone who's using government benefits wears or carries something yellow. Or the government offices could be in a yellow building.

I think this is something that could be applied as you craft your WIP or added in as you make the second pass through your manuscript for editing. After all, theme is something we don't necessarily incorporate into every line of prose as we compose our MS, but we can go back after it's complete and inject a little here and there to really beef up the story.

What do you think? Would you consider using color to enhance the theme and mood of your prose? Have you used tricks like this in the past, or have other ways of expressing symbolism you're particularly fond of?
Posted by B. Miller at 10:56 AM

WoW! This post is amazing - so, so powerful! I am bookmarking and printing this for my writing folder, B.

Yes, I think color can be just as powerful a tool for a writer as for film.

What a powerful post!!!
I think colours when I am dabbling with photoshop, but never thought of extending it to prose.
Must try it out.

This is so amazing that you posted this today, because I was just reading through a few excerpt of my novel and noticed that I used blue a lot when my MC was down or having difficulties. I gave her a blue dress, she sang Joni Mitchell's Blue, she bought her daughter a doll with a blue dress. WOW! I hadn't even realised until today. LOL

Have you ever seen the movie The Colour Purple? Great symbolism in the title there too :)

I agree that colour can convey theme, and create associations just as much as setting. I like it when it just shows up naturally as is what happened with your previous commentator. I read a book who's main character had synaesthesia-the ablity to see sound in colours. Facinating.

Having not seen any of the films I found this most interesting, I enjoyed the read , Thanks for sharing this with us.

Have a good day,

This is brilliant! As I sit here and try to think of what I can do to spruce up my WiP, this is what I read.

I shall thank you forever. And maybe in the acknowledgments. *wink*

Interesting! I've never thought about colour in writing but my husband uses them a lot in his films. I like to use hair as symbolism. Yes, I'm that deep.

B, your posts are almost as AMAZING as you are dear.

I never thought of this before. Your examples show the power of color. I'm thinking about my recent manuscript, which is about nature and the color green comes up a bit. I'm going to look at the manuscript and see about playing up that color. Thank you!

Second of all: Great Post! I felt like I was back in film school for a minute, because this was so the kind of stuff we had to analyze and write essays on (all the symbols hidden in the 'mise en scene') but I never really thought of applying it to my writing much. I did use color as a key role in once scene. But I definitely could use it more. So thanks!

Look forward to getting to know you through your posts. I love connecting with other writers. Though I'll admit, I do a lot of blog hopping at work, so I sometimes lurk more than I comment. But I'm always out there (cue Twilight Zone music) :)

I'd noticed before that I repeatedly mentioned orange and ochre in my novel but until now I didn't think about whether that might actually mean something. I will have to look into it! I like this idea, thanks for sharing.
- Sophia.

This is a fabulous post! I'd never considered color before but completely agree with the power of the examples you cited. In one of my WIPs, I have a dove that makes a symbolic appearance throughout. You've given me something to think about!

I'm bookmarking this page too. Wonderful post. I'm currently doing my first round of edits on my WIP, and "themes" were something I was thinking about for the next round of edits. Thanks for this insightful post.

A very interesting post indeed. I did see both of those movies and always associated the red coat with the blood of death. I did not make the connection in The Sixth Sense though...very interesting!

Oh Becky, you go with your awesome self! This is such a wonderful blog post topic.

I love adding layers and nuances, and I think themes and mood can be greatly enhances by subtle symbolism.

Just wanted to come back and thank you again. I checked each "green" section for evaluation. And I even added a couple.

Never thought about that - how interesting!

It's funny... now that you mention it... I do use color. All of my assassins wear black leathers. However, I have one "hero" who also wears black leather clothing, carries a black whip, his symbols and his name, Black Rose. Two black rose tattoos symbolize the wife and child that were killed. However it could just be that I like the color black. ;) Who knows.

What an awesome thing to think about! I personally have never used color in my stories but I do have a place that I repeat in each one, I blogged about it today for my guest blog but what I mean is I have a safety spot in each one of my stories that I start in, it awlays evolves but always starts in a particular house so it's cool that you chose to share this post today!!!

Brilliant way of thinking for sure!

I hadn't ever thought of using color like that, but now that you mention it, what a great idea! Thanks so much.

I don't necessarily use color in my work however I have 'seen' the color my work is. Whenever I think of my Regency romance I think of it in violet tones. My contemporary romance is more pinkish-red in hue. My YA is yellow.

I didn't consciously make this move, but yellow and violet are repeated colors throughout my most recent novel, Looking for Anita. It starts with the colors of the flowers on main character's best friend's bedroom wallpaper and transfer throughout MC's nostalgia. When I've done presentations for the book, I've always decorated in yellow and violet.

Oh, yes, I do think color can be a fantastic symbol in novels. Now I want to look over my stories and see if I unintentionally used a color throughout. I'm going to pay more attention to color now! Thanks for the post!

I don't pay much attention to color in books and I should. I do love colori in movies and the unusual way it's used sometimes. There's a beautiful picture book called the sound of colors. It's about a blind girl walking home and hearing all the different colors on her way. I need to use more color in my writing.

Excellent post, good lady! Bringing out color-symbolism is something I might think about more in the revision process than the first draft, but it's a wonderful thing to add to the writing armamentarium.

I don't think I've ever consciously used a colour as a theme or as a form of symbolism (I usually use other kinds of motifs, like a glass of milk in one of my novels, but it's such a great idea!