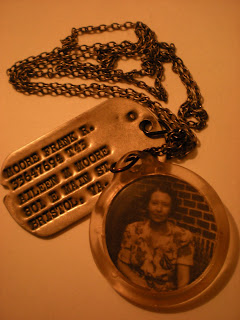 I never knew my maternal grandfather. He died in the late sixties, several years before I was born. My paternal grandfather passed away even earlier than that - when my dad was still a kid. When I was younger, I never gave much thought to not having a grandfather; like most children, I accepted the ins and outs of my family dynamic without question. Other children had granddads, and of course I understood the concept. I just didn't have one of my own.

We never really talked about my dad's father - I guess he was just too young when his dad died to be able to relay much about him to us - but my mom talked about her father every so often while telling me stories of her childhood. I remember being fascinated by these tales of my mother as a girl. I listened faithfully, rapt in her memories, learning about my grandfather (whom my mother referred to as "Daddy" and my sister and I always called "Papaw"), his huge heart and wicked sense of humor. There weren't many of these anecdotes, and I can still quote them chapter and verse. But they were still only a handful of glimpses into the rich life of a man who passionately loved his town and his family.

In recent years I've grown much more interested in our family's history. I discovered some interesting facts about my heritage, such as my grandmother's membership in the Daughters of the American Revolution and the Daughters of the Confederacy. I learned I was related to two governors of South Carolina (both held office in the 1700's). I also found out that my great-great grandfather, Yelvon Brown, was an officer in the Confederate Army in Virginia. What a lineage!

Yesterday while I was visiting with my family for Easter, I found a bag of my mom's "keepsake jewelry". Through the plastic I saw the distinctive shape of dog tags tucked in with assorted bracelets, watches, pins, and charms. I dug them out and was delighted to find they were my grandfather's. They list his name and Army serial number, next of kin, and religion. There was also a small weatherproofed portrait of my grandmother with the tag, and on the opposite side of her portrait was a real four-leaf clover pressed against the photo's backing paper, perfectly preserved under the clear plastic. Mom said my grandmother had it made for him, just before he was shipped out.

Mom gave me the dog tags to keep for a while. I asked for them; I felt compelled. Now I can't stop thinking of my grandfather in the war: a couple years younger than me, homesick for his town and his wife, proud to help his country end the war as however he could. He wore this chain overseas and back home again; it was around his neck as he wrote letters to my Mamaw and slogged through mud and wished on evening stars to get back safe to his home in the Appalachians. He looked at the picture of my grandmother thousands of times in the two and a half years he was at war, wishing he could step right into its black-over-white composition and take her into his arms. He pressed his thumb over that four-leaf clover for luck over and over again as he faced dangerous situations, and its magic never failed him. Wearing these tags, I have the clearest sense of him as a real person I've ever had.

Eight months ago, I started a journey. One month left. It's an uphill battle but I refuse to surrender. I'm using this totem to remind me of the bravery I come from; the determination and pride which runs in my family. In me. I'm wearing the tags around my neck right now. That four-leaf clover is getting a workout, let me tell you.

As for Music Monday... This post might not be entirely music related, but I do have a thought for you. Long ago my mother told me what my Papaw's favorite song was. I think I'll go listen to it now. So, friends, if you know "Sixteen Tons" by "Tennessee" Ernie Ford, feel free to hum along.
Posted by B. Miller at 3:03 AM

Most endearing, I was fortunate to know both my grandfathers but not so my dad he passed away when I was three. I lived with my maternal grandparents alonf with my mum and brother. I enjoyed your write very much and Yes I do remember the song sixteen tons from way back.
Look forward to "E" tomorrow.

One of my grandfathers died before I was born, so I know very little about him. Hope you can find out even more about your grandfather.

I only new one of my grandfather the other died before I could meet him. However I would say that one supplied more love in his lifetime than I'm sure the average! At least I like to think so!

Thank you for sharing your story :)

I can tell you are a true, seasoned writer- not just an everyday blogger. Thanks for sharing your talent in this A to Z challenge.

I love this family history stuff! My magnum opus, when I someday feel skilled enough to address it, is my grandfather's very sad story. And our great great grandfathers may have shot at each other in the civil war! (mine was a member of the Vermont Sharp Shooters), though I don't have a single strand of family in the US before 1800. Influx of Scandenavians in the 1800s brought most of 'em.

Very cool to have such a tangible connection, at least for a while.

You have quite the heritage there!

What a lovely post. I knew my grandfathers, but htey both died when I was too young to talk to them as an adult. My last grandparent died three years ago and I'm glad that I had many opportunities to ask her questions about her family. My cousin even did an interview with her. I'll have to remind him of that, because he planned to transcribe it.

And I know "Sixteen Tons" quite well.

What a lovely post and tribute to your grandfather and your family. I'm glad you found something to hang on to.

Great post. I wish I would've asked more questions and gotten more stories from my grandparents when they were alive.

That was a really nice post. You got me thinking of my grandparents ... I could write pages. My grandmother was German, and got up to a whole of mischief with American soldiers during the war. I could probably write a novel about it!

Very touching. Made me think about family and the wealth of inspiration and challenges that come with being a part of something bigger than yourself. Good luck on your journey.

You are such a wonderful writer, I enjoyed your post very much! Cannot wait to read your A, B, and C posts as well as the rest of the letters of the alphabet. I am Following you now so I can keep up with what you are writing! Much luck on your book!

I love this post. I used to listen to my aunts and uncles talk about things they had done as kids. Listened to them talk about my grandparents. I loved it. I'm always interested in my family heritage.
And humming that song now. :D

I never knew my maternal grandfather either( he died when my mom was 8), but my mom liked talking about him. She says that there's a lot I have in common with him, which is cool because he seemed awesome. that's cool that you're learning more about your family! As a wise man once said: I am not here because of the path that lies before me, but the path that lies behind me.

I never knew a grandfather or a father.
But I really loved this, B.
And you even managed to make it a music monday. :)

Excellent story about your ancestry. I think that's one of the deepest things we treasure: where we came from.

I couldn't tell you the words to 16 Tons, but I can hear the music in my head. I seem to vaguely remember my mother listening to it.

How wonderful that you have something tangible left from your grandfather. I have some mementos from my father and they mean a lot to me.

Wow. That was beautifully written.

When I was younger, my mother wrote a genealogy for my family. It is very valued by everyone in the family--a way to connect us all and remind us of the past.

Thanks for sharing that great story. I don't know much about my grandparents on either side, my parents didn't know much either. So I've been trying to trace the story, it's taken years so far. but I will find out about our family one day :)

Thanks for all your wonderful comments, guys! I appreciate you all so much and I love sharing my journey as a writer with y'all. You're amazing!

I knew both my grandfathers (in fact, I knew all four grandparents), and was very very close to one (not at all to the other). But perhaps because I knew them, I never thought of them as people who could have been my age.

Loved your post, specially your description of the gift your grandmother made specially for him with so much love.

What a powerful tribute to your grandfather. It proves the power of your imagination to be able to see him at war thinking of his family and home. Sounds like another novel to me.

Wow! What a great post. I to the letters in my post today. Let me know what you think.