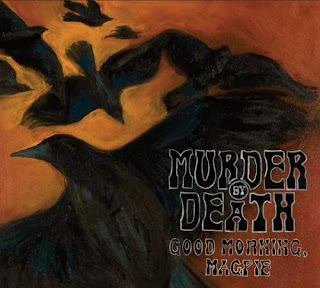 Yes, yes, He does. And the way you can tell? Because He gave Indiana the musical powerhouse that is Murder By Death.

I've mentioned Murder By Death a few times in my blog, most notably in my entry on live music. Today, for Music Monday, I'll be reviewing their brand-spankin-new album, Good Morning, Magpie. This album was released last Tuesday, April 6th, and it's the fifth album from Murder By Death, a band that's a strangely wonderful hybrid of rock and country, with epic accents from strings and a decent amount of folk thrown in for good measure.

Murder By Death has been making music for a decade, and over the five albums they've produced in those ten years, their artistic growth is impossible to deny. I love each album for its own particular voice and story - from the Devil visiting a small town in the New Mexico desert in Who Will Survive, and What Will be Left of Them? to the twelve different interludes about Hell on In Bocca Al Lupo, and everything in between. Murder By Death is known for their dark style and subject matter - the band has recorded songs about jailbreaks, murders, the death penalty, ghost pirate ships, whorehouses, and all sorts of under-the-radar goings on which happen on a regular basis in the dark universes they create with their lyrical and musical style.

Good Morning, Magpie does have its dark moments - the thunderous "White Noise" is ominous and foreboding in its deep study of anger and lost retribution, and "Piece by Piece" is a wonderful take on their fascination with convicts and the choices they make in their lives (see "Sometimes the Line Walks You" and "The Big Sleep" from In Bocca Al Lupo for examples).

But there's a new undercurrent of positivity and hope in this album that outshines the darkness. It's delivered in the traditional Murder By Death style we've grown accustomed to over the years - strong, catchy lyrics; heavy bass and cello expertly mixed; experimental drumlines and inspired rhythms underlying their inventive (yet reassuringly familiar) sound. "Foxglove", a ballad about a ghost lady who falls in love with a traveler in a forest, is a beautiful love song, while "You Don't Miss Twice (When You're Shaving With A Knife)" is quirky and funny, with a great drum set that includes a trash can lid and a propane gas tank as percussion instruments.

"King of the Gutters, Prince of the Dogs" is a wonderful song about being at the bottom but still looking up, and "Yes", a song about moving on after the death of a loved one and remembering the good times with them instead of focusing on your grief, is one of those songs I know I'll be returning to over and over in the years to come. "As Long as There Is Whiskey In the World" is going to be a great drinking sing-along song in concert - I can't wait to see it live. The horn section of "On the Dark Streets Below" is a new sound for Murder By Death, and it really brings that song to life.

The CD I received was packaged in eco-friendly card stock and came with a poster signed by the band (the virtues of pre-ordering). There's also a stunning vinyl press available of this album in midnight blue wax. It comes with an embossed gatefold cover, bound 12 page uncoated color booklet, a 24"x 24" poster, a sticker and a big black feather. These guys really pay attention to their packaging, and it's absolutely beautiful.

Overall, I think Good Morning, Magpie is a triumph. Murder By Death has worked long and hard to get here, and it shows. The album is a wonderful showcase of their talent, dedication, and view of the world around us - a view which is sometimes striking in its raw assessment of how the world works, but never disappointing. They've once again given this horror writer a new group of songs to work into my inspirational playlist - one that continues to feed my creativity and stoke the fires of my imagination.

Thanks to Sarah, Matt, Dagan, and Adam for working as hard as they do, all day, every day, for the past decade. It shows, and you're loved for it.

You can buy your own copy of "Good Morning, Magpie" on CD or vinyl by clicking here, or you can get a digital copy of the album here.
Posted by B. Miller at 12:43 PM

I will have to take a listen after your recommendation. Thanks!

Just gave them a listen. Good stuff. Will need to get some off itunes.

From your indepth review, I have a feeling I'll like their music. I prefer music that has that folk influence. This band sounds like it might be like Sea Wolf, which is one of my favorite bands. I'm at work now, so I can't listen to any samples, but I intend to when i get home.

I took a listen as well - a little folk & country mixed in.

Don't much care for their name but thinkin I might like their sound. Will have to give it a listen. Gotta tell you though the title of this post totally misled me. I was thinking Indiana Jones for some reason (I'm quite sure Jesus loves him too!) and then I was wondering what my man Indy had to do with all those crows and murder. Takes me a while some times but I catch on eventually!

Sounds awesome - especially "Foxglove" that's one of my favorite flowers. I love the cello in their music. Haunting.

LOL - are you their number one fan?

With your high praise, I'll have to check them out. They sound interesting.

I like your passion. I'll check it out. I love the Internet. Its a great way to promote artistic works of all kinds.

Thanks for the review, I've never heard of them...but I like their sound!

I'll have to check them out! Sounds fantastic!

Thanks to everyone for reading and commenting!

Palindrome, Yvonne, Alex, Gail, Mary, Mason, Beth... thanks so much for giving them a chance and a listen! I hope you find something you like.

Megan... I love iTunes!! They're all over it too. If you're looking into albums, I'd recommend "Who Will Survive" or "In Bocca" but "Red of Tooth and Claw" is also a wonderful concept album you might like.

Stephen... the internet is amazing!! I can't believe how many new forms of art I've been introduced to by online friends!!

Jen - you posted while I was posting! Thanks for listening!!

I like new artists; great way to promote your favs! I will check'em out...sounds intriguing!

Thanks, Ellie! I love sharing new music with people! :D