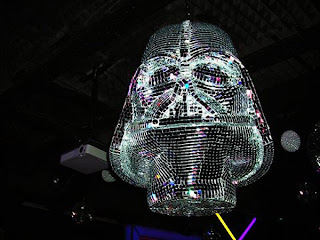 So dear readers, it's Friday. I've been sitting here for the last hour or so going over possible N words for the A to Z Blog Challenge today, and my Lord, it's like my brain is made of Swiss cheese. All the good ideas just disappear in those holes and I'm left with nothing but words like Nepal and Nickelback and Neverland... uh, yeah. SO, since it's FRIDAY, I'm giving myself (and you) permission to just be silly.

Hence Darth Disco. Wouldn't it be cool to have one of these? I'd try to make one if I was crafty. (OK, I'm crafty in other ways, just not like this.) I'd hang it in my living room for parties. Of which I'm having a small one this weekend... at my house, which my roommate likes to call Neverland. (He also calls me Pan, sometimes.) BANGARANG! We'd party under Vader like it's a long time ago in a galaxy far far away... such as, 1999, in Nepal. Dancin' with yaks and Sherpas. OH yeah.

Last night Nickelback came to the Clark Kent job. NOT kidding, folks. The band's playing here in Greenville tonight, and they wanted to do something fun on the night they got into town. So they came bowling! Cool huh? I set this up with our local top 40 radio station. The joys of being a sales and marketing director! The band was a lot of fun, and they brought their road crew too. They ate about a dozen BLT's from the snack bar and went through a BOTTLE AND A HALF of Jager. But they were really fun and loved our center, and we all had a great time.

Nickelback invited us to the concert and to hang with them backstage, but I think I'll pass. It was fun hanging out with rockstars, but I'm not really a fan of their music. Besides, I need to get ready for the party tomorrow night - which means cleaning the house and settling down to write as much as I can, 'cause I'm giving myself tomorrow night off to blow off some steam and socialize.

I'm making a punch for tomorrow. Half a handle of vodka's been hanging out in the house (why can't this be an H day??) for a couple of months now, so it's time to put it to good use. If anyone has a suggestion for a good punch, feel free to share. We're probably going to play some games and listen to music and hang out until the wee hours of the morning. I expect anywhere between fifteen and twenty people, so there will be lots of fun stuff going on.

I have the perfect house for a party too - three stories, with a finished garage/basement and a huge living room and kitchen, plus a deck out back. We're secluded from our neighbors so we won't bother them with too much noise, and I have a fire pit in the side yard we're going to make s'mores with. It's gonna be a blast. Wish I could teleport some of y'all here to SC to hang out with us tomorrow.

And Darth Disco too!

I hope you guys have a fantastic weekend.
Posted by B. Miller at 12:45 PM

Love the idea of Darth Disco. I wouldn't give up the concert though, I like Nickelback. Vodka poured in a top hole in a whole watermelon usually works for me. Have fun at the party.

A wonderful piece of imaginary,Absolutely superb to read. and you said you had nothing to write about??????

You bring the disco ball, I'll bring the tunes. BAM.

It's not a pointless comment if it makes someone laugh, right?
- Sophia.

I wish you could teleport us, too! Sounds like an awesome party. S'mores are the best. Have a fabulous, fun weekend!

Okay, I was chuckling helplessly until you got to the Nickelback part, and now I am TOTALLY envious! Did you TELL Chad Kroeger that one of your friends has him on her laminated list of five exceptions to marital fidelity? *dies* He's sworn to cover me with jello and invited me to scratch my name across his ass--how on earth could I resist that?! You are NEVER to entertain him again without inviting me; understand?! Sheesh! You've got me in interrobang mode! *dies again* *fans self* OHMYFREAKINGGAWD CHAD KROEGER met one of MY friend!!!!

and I like vodka with cranberry juice and a sparkling lemonade (Sunkist makes one)... It's yummy and prettiful, too.

The only drink I know how to make is a white russian. vodka, kahlua and cream or milk. Yum! Have a great time!

Hart's vodka recipe is a good one...I also like Anne's drunken watermelon. Yumm...and I'm glad you're gonna have a night off to party at home.

I would gone to that concert...they're not a band I listen to, but they're not awful, and it would have been fun.

Darth Disco! haha! Too funny. I like a previous commentor's idea of pouring vodka in a watermelon. Mmmm...just have to keep the kiddies away.

Darth Disco sounds fun...are you going to have light saber fencing? I think you need a Star Wars
type punch. http://www.cooks.com/rec/view/0,173,151169-249199,00.html
Try this you could use blue cranberry juice or other kinds. Or make a similar one and add some
food coloring, bright lime green.
I have made slush with lemonade, limeade before. Have fun!

It's always a good bet to give yourself permission to be silly. The world would be a very boring place if we had to be serious all the time! Thanks for an entertaining post!

I would totally made that disco head too if I was crafty like that... but I'm only mostly crafty with a sewing machine. Can't really sew a Darth Disco ball...

Second on the sparkling lemonade with vodka punch. Lemonade and vodka=yum.

Nickleback and you say no to seeing their concert AS GUESTS??????? You are too smitten with Murder by Death to see straight. Just kidding...but you would have had fun. It's so cool that you could give them a good time in Greenville. I know they had fun if you were around. What a great marketing situation to set up with the radio stations. You deserve a raise for coming up with that plan.
Now we'll all be haunting the Bowling Center to see what rock stars show up - hey, just a whisper here: VAST, Earshot, Ten Years, oh yeah, and don't forget Trent Reznor. You know, on the QT, I won't tell anyone.
I bet Crunchy could make a Darth Vadar Disco Ball head. He'd just need a Darth Vader heavy duty mask - not the cheap kind, but the cool kind, stuff it full of blinking white christmas lights (the kind that won't get hot) and put it on a rotator thingy, like they used to put those aluminum Christmas tress on. Voila! In the dark no one will know the difference. And then we could hand out miners headlamp hats like in th3e movie, "Blade" and have a DJ play space techno... and stuff might fall from the ceiling, now wait a minute went to far, erase that -- now you see where my mind goes.

May I say... this was ridiculously good. AND POTENT. Whooo! We had a great time! :D

I want a darth vadar disco ball for the inside of my barn! wouldn't that be interesting! write on sista! amazing!