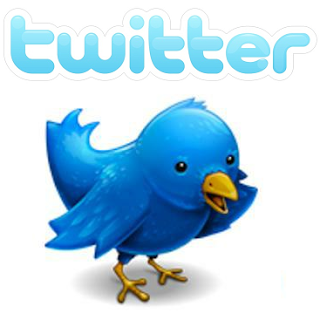 I do - my user account is @bmillerfiction. You can see the last few entries on my Twitter feed on my sidebar, about halfway down on the right. I started using Twitter last year, under a different account I use primarily for personal updates and info I'm not entirely comfortable sharing with the whole free world. I didn't have much to do with the personal account for a long time. It sat dormant for weeks at a time, because I'd forget about it. When I remembered, I just didn't see the point. Isn't this what Facebook is for? I'd think, shaking my head.

Then in January, I started working on building up my writer's platform. I beefed up my Facebook fan page, started this blog and created the B. Miller Fiction twitter account. What really decided me was finding other writers on Twitter and reading the things they had to say - namely Neil Gaiman, Poppy Z. Brite, and Joe Hill. Each of them just posted about their regular everyday lives along with whatever writing tidbits they wanted to talk about. I thought this was pretty interesting and I wanted to do it for my own writing - I like to daydream that one day I'll have lots of fans like the writers I just mentioned, and they'll be interested in what I have to say.

Since I started using Twitter I've met lots of new people and fans and found some really great sites through different tweets. It's definitely something I'm going to keep doing; it's a low time investment activity that I can do every day while getting the word out to the internet about my writing. But I hear a lot of people in the blog-o-sphere talk about how they don't like Twitter or they haven't taken the time to "figure it out" yet. I wanted to post a few basics about Twitter that you guys may not know, so you can start working on building your own Twitter feed.

Here's some tidbits to help make your Twitter dealings easier, in no particular order:

Hashtags - Have you noticed the highlighted words with a # before them? Those are known as hashtags, and they're a way of grouping tweets from different users together as a topic. I use the #writing hashtag a lot - especially when I post new blog entries!

Search function - you can use Twitter's search function to find people who may be talking about the same things you are. Here's an example: after my post about Murder By Death's concert I attended last month, I searched for "@murderbydeath" - to see who else was talking about the band. I found three new followers this way, just by messaging them about the blog I'd written and sharing how much I liked the band's music. You can do this with just about anything!

Organizing Tweets - I use a nifty program called TweetDeck to keep an eye on my tweets, who's mentioned me in their tweets, and other trending topics I'm interested in. It puts everything together in one layout on the screen so I don't forget to check anything. It also saves all my preferences and keeps everything in order without me having to maintain it. I use Twitter a lot more now that I have a program to help me organize it all. Without TweetDeck, I felt overwhelmed by Twitter, too.

Hope this info helps some of my blogfriends get a little more comfortable with Twitter. It's an important social media tool that I think can help us all get our names out there a little more effectively. Plus it's another way for us writers to communicate with each other! I know I need that every day now, because nobody else understands my crazy ways.

Thank you so much for this info. I could have written the beginning of this post. I've had a Twitter account for a year now, but rarely use it. Now that you've explained some of the things, I won't be as confused (but hey, this is me, and confusion is the norm, so I don't expect it go completely away!)

I too have a neglected Twitter account. I guess I just have to decide to use it...the info you gave above is actually really helpful.

One fun site I found is http://portwiture.com/ It gives your twitter updates in a collage of photos from Flickr...really cool.

Thanks for this post. Like you, my Twitter account has been dormant forever. At some point I'll probably just get rid of it and start over with a new account. I just don't feel up to tweeting at this point with all the other demands on time.

Thanks for providing this information. I've been thinking about setting up an account, but worry about losing any more of my writing time. It would be fun to mention what's happening during subbing in real time. But I'd have to commit to looking at and respond to other Twitter accounts.

I tried Twitter a month or so ago but could not understand it.
I am ok using a pc like blogging or emails but when it comes to anything techincal I am confuse.com

I haven't jumped into the Twitter pool yet - I don't think I can handle that and my blog and my job and my life yet!! :-)

Thanks for this. I just started using Twitter @mywritingjourne
I'm so confused with it. I think the more I use it the better I will get at it.
Thanks!

My time is so limited. Twittering would just be frittering the time I could better use in editing my novel and writing my next one.

After all, what use is a platform with nothing to sell from it?

Have only success in the future, Roland

Great info; I have twittered, yet.
I have debated about it, not for me at this time. In the future maybe...
I will have to add you on FB~
Have a Wonderful Weekend!

Thanks for the good information. I've been too mystified by the whole thing to start a Twitter account, but it's something I know I want to do. Maybe now I'll take the plunge.

I am the most obsessed with twitter than any non-twitterer you will ever see! Fascinated by it but probably won't go there.

Thanks so much! I have a rarely used Twitter account as well... I have so many different types of people that I am interested in following that I get overwhelmed by tweets! I have figured out a lot you mentioned along the way... but I am so grateful to have a reference to look back on for whenever I do decide to get a little more involved in Twitter. :)

I'm a huge facebook fan and just recently opened my facebook up to my writer friends... it's kind of exciting!

I'm still learning the tweet thing and I appreciate all the tips! I think I'll give it another try!!!

Way to give yourself a platform! I'm slowly working on mine!

I guess I'm one of those on the blogosphere who shuns Twitter, but I keep hearing about it so I eventually may have to cave. Your explanation helps, but the concept still seems bizarre to me. I'm slow when it comes to technology.
Thanks for the enlightenment.

great post -- this is some really valuable information, and so critical for web presence.

thanks so much for sharing!

hope i see you around! :D

Interesting and helpful post. I had wondered about TweetDeck and if it really helped. I'll have to check it out now. Thanks.

Good post - I just popped over and followed you on Twitter. I find it makes so much more sense when I use TweetDeck. The writer chats are great too.

I had a twitter account and kept it for a couple years. I deleted it after Christmas as I started to get annoyed with it and how much stock I put into what people were saying, etc. It was time to go and I haven't looked back. I think it's a great platform for some, just not for me at this point in my life.

Twitter stresses me out. It makes me think of a mosh pit.

This was very helpful. I'm still not sure I'm completely on board though I do have an account: @writerwen, if you'd like to follow me and offer your encouragement ;-)

Oh, you only THINK Twitter's a low-time-investment platform builder. Ha! Hahaaa! As my Korean friend in high school said, "I raff at you!"

Actually, perhaps you'll be able to resist its siren song better than I. It's a ridiculous time-suck if you get into it.