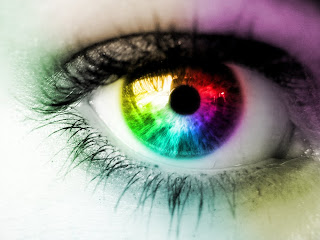 I realized while I was getting ready for the Clark Kent job this morning that I forgot all about music Monday!!

Geesh! What kinda blogger am I? An off-the-cuff, disorganized, but still lovable one... well, mostly anyway. So to make up for it, I want to talk a little about one of my favorite songs by the Arcade Fire. It's called "Wake Up" and it's off their 2004 debut album Funeral. I first heard this song a few years ago, and I fell in love with it immediately - it's everything I want in a song: epic lyrics, a shifting, moving melody, and an overall uplifting sound. If you get a chance today, you should really give it a listen (click on the link above!). It's worth it. And it's only about five minutes of your life. You've spent more time in drive-thru lines. ;)

I love this piece of lyrics:

And children don't grow up
our bodies get bigger, but our
hearts get torn up
We're just a million little gods causin' rainstorms,
turnin' every good thing to rust
I guess we'll just have to adjust...

I really identify with this. Do you ever feel like you're still a kid inside your grownup body? I know I do. Stumbling around, wondering if what I'm doing is the right thing, wishing for some kind of direction... more often than not doing more damage than good. It's at times like this that I remind myself to breathe. And breathe. And breathe some more. I think terms like "adult" and "grownup" don't necessarily apply to artists. We are awake, fully awake, so much more so than most people - we don't really care so much about which celebrity is dating who, or what the stock market trade value of a certain company is, or whether or not the clothes in our closets are "in", or which reality show is currently kicking butt and taking names.

We're more concerned with the bright pinprick of light that's the evening star, set like a startling jewel in the velvety cobalt of the twilight-filled sky. We observe people while in public places, marveling at their secret lives on display for us to see, even though they don't realize it - listening to their conversations on airplanes, watching them play with their kids in the park. We are awake to the real world, a universe of color and sound and drama. It's our job, our calling as artists to capture that world to the best of our abilities. 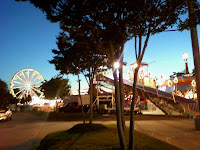 Last night I was dragging from a ten hour day at work so I went to my local coffee shop for a delicious caffeinated beverage. On the way back to my house, I saw a little carnival set up in a parking lot, a study of flashing lights against the deep blue evening sky. Instead of passing on and heading back to the house, I pulled over and took a couple of pictures - and bought myself a bag of fresh cotton candy! 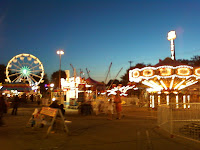 On the way out of the tiny cluster of lights and bells and barkers, I saw a Greenville County deputy parked beside the lot, leaning on his car and observing the few cars and people who'd gathered. I smiled and introduced myself, told him I was writing a book and that one of my main characters was a police officer, and then had a great little Q & A session with him about police work. I found out he's an English minor who's also working on a novel, and we had a really cool conversation about writing. We also traded info and he agreed to read my first draft after it was done and offer pointers on what will make Jack a more realistic police officer! YEAH!

See? I was AWAKE to the possibility of magic in my life, and the universe delivered! I could've passed on by, left the carnival and its enchanting little pool of twinkling lights and whirling rides behind, but I listened to that voice inside me, the one that said, hey man, maybe we should take a closer look at that, whaddaya think? and was rewarded for my efforts.

With my
lightning bolts a-glowin'
I can see where I am
go, goin'!

You better look out below!

That was great. I loved the carnival pictures. Good for you...we all need to pull over, enjoy the lights, and buy ourselves a treat once in a while.

A long day at work mixed with a wonderful break and beautiful pictures! Not many can say they stopped at carnival to pick up cotton candy before they headed back to work!!!

I love the lyrics those were really cute. Our bodies just grow up... I think that's very true!

We both blogged about music today!

A kid in a grownup's body? I didn't realize I HAD grown up.

Nothing like getting the inside scoop - smart thinking to talk to that police officer!

Those are fabulous carnival pictures. Not all the creepy stalker magnet that I imagine...not that I haven't been to a normal carnival. I just still imagine that they're teeming with stalkers.

A wonderful post, yes I still feel the same inside that I did many years ago .....a pity about the outside...lol. I'm afraid my children despair of me if we go to the park and I insist on going down the slide.

Have a fun day,
Yvonne.

You took time out and it paid off!
Creative types, need to do this, to change their view,recharge their soul and quiet that unsettled stir. The churning and yearning for completion, sometimes in reality we need to walk away, like a child needs time out!
Wow, I am thrilled, you were open, free, threw caution to the wind! You were rewarded~

Oh, I copied and pasted your comment about the spider, at the end of my blog, with a link to yours! Thanks for sharing, that was
fun to found out~

How cool for you. :) And really neat pictures, too.

I'm not sure people who are older than us have any more idea about what they're doing, though. They're just a bit better at making it seem as if they do! :)

Just goes to prove, you never know what a few minutes out of your day can change. Great carnival photos.

What a great story, B. We never where opportunities may be waiting. :-)

I like the lyrics about feeling trapped in a body. Most adults must feel like that. Years ago, when my three-year-old son put a gash in his chin, bleeding all over, I realized that I was the grown up, so I couldn't swoon over the sight of blood.

That's a great carnival picture. I used to work at a carnival, so I'm a little jaded about carnivals.

The lyrics are right, B. Our bodies grow up, while our emotions stay childlike. Give an adult great power and see him/her become a mean child all over again.

A favor, cyber hat in hand, B. Would you go over to my entry in the Melissa Marr short story contest?

If you like it, please vote for it. If not, then still thanks for going the 2nd mile and having a look-see. I promise to do the same for you should you decide to enter. Roland

I have no intention of growing all the way up - ever. I need that little child inside. I won't let her go :)

...we definitely ARE awake to the real world. As writers I believe us to be more sensitive to noticing what many others would consider mundane. We see it, feel it, and yearn to twist it into a yarn worth remembering. Great post:)

Speaking of music, did you catch the blog conglomerate that we're putting togehter for May 17? If not check it out at:

May 3rd A to Z Challenge Reflections Mega Post

We have several so far who've said they'd do it. If you want to join us--you should since you like music so much--the Linky tool will go up on my site on May 15 I think but the official Blog post day is May 17.

Lee
May 3rd A to Z Challenge Reflections Mega Post

I love your definition of an artist. It makes me proud to say I am one. Maybe not a great one, but at least I aspire to be.
And, yeah, I still feel nineteen. Too bad my body doesn't!

Yes, I keep wondering if a day will come when I no longer feel like a kid. But I think that as long as I'm taking chances and trying new and challenging things, that day will never come.

That's awesome about the cop! It really does seem "meant to be" when things like that happen. Sometimes I think that our brains know way more than they let on to themselves. :)

What a great description and great experience! I love that the police officer is a writer on the side. (also that you had the guts to talk to him about it). I actually feel like I am a different KIND of awake... the psychologist in me tends to think in internal terms, so I attribute, without necessarily noticing the external details or thinking of the specific questions... I should take your example though, as this was fabulous.

I need to meet a police officer like that. Man. I've got 2 WIP where I am currently basing everything on TV so I know it's completely wrong. Why did I start writing them? you may ask.
Good. Question.

Liked the carnival pics and yes, we creative people really don't grow up do we?