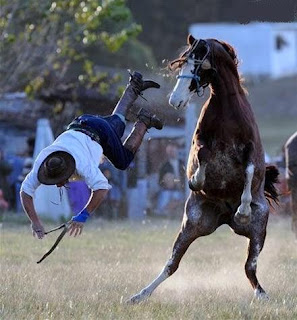 I received a rejection letter from The Pedestal Magazine for my story "Knights of the Road" today.

All right. Let's go ahead and get this out of the way: I know rejections are only a numbers game. I know the more rejections I get the closer I come to having another short published. I know my personal writing hero, Stephen King, had a nail above his desk that he put hundreds of rejection slips on, so many that it made the spike fall off the wall at one point from the weight. I know it's something we all have to deal with. I even wrote a blog entry a few weeks ago, about riding the rejection train.

But knowing all these things doesn't make that rejection letter any easier to read. "We don't want your stuff", regardless of how you phrase it, is never fun to hear. When I saw the email in my inbox this afternoon from The Pedestal Magazine, I had that little rush of excitement flutter through my midsection. I summoned positive thoughts. I visualized success. And then I clicked on the email, and read what it had to say.

Clunk. Another "no thanks" to add to my pile.

So now, as I did back at the beginning of February, I'm using the rejection to bolster my confidence as best I can. I went back over the story, polished it and changed it again. I tightened the action, took out vagueness, and made it a lot punchier (at least, in my opinion). When I was done with it, I was a lot happier with the end result. I then, before I lost my courage, sent it to Weird Tales, one of the last holy grails of dark fiction and fantasy publication.

I'm starting to wonder if short stories are just not my forte. Now that I've been writing my novel for several months, I've realized that I'm a long-distance writer... I'm much better in extended formats, that allow me to develop characters and plot and tension in my own time. Short stories can be limiting, because you have to show only small portions of those things... and I've never been one for small portions. Looking over my rejection list (which keeps growing longer and longer), I can't help but feel a little discouraged. I know my shorts are good... so why can't I move them in a market?

But I won't give up. I have to get back on the horse, no matter how many times it throws me. Sooner or later I will have that bitch tamed. You can count on it.
Posted by B. Miller at 7:50 PM

Thank you for this great post. I received a lot of rejection letters for my first work of fiction, so much so that I ended up giving up. I am now working on a second book (extracts on my blog), and am feeling a lot more confident about this one.

My dream is to see my book of the shelves of my local bookstore. In fact, I'll go one further: I want to see an empty shelf where my book should be, with a sign saying "Sold Out Due to Excessive Demand"!

Keep in mind that a lot of rejected stories are sent back simply due to space constriction, not because they're not good. And must fit the current issue. If they've already chosen a similar story in either storyline or style the second story gets rejected.
And then there's the angle of the authors preference and personal taste in what they read. Every editor has opinions on what rocks their world and it has nothing to do with quality. Writers often never know the reasons behind the rejection,m but don't assume because your story was bad, unless they say so in the rejection letter. Unless they specify any flaws, don't take it personally. You just hit the wrong desk at the wrong time. Sure, rejection time is always a good time to reread your story and fix anything you think is wrong with it. If you're writing and reading other works consistently, you're constantly improving as a writer. But don't let it get you down. Most of the stories editors reject, they regret having to do so. There's just not room. And there are many other factors they're taking into consideration.
So, yes- get back on that rowdy unpredictable steed. There's gonna be those days he settles down and takes you for a fun ride.

Rejections make you stronger. That's what they say, anyway. They still hurt, though.

Sorry about the rejection slip. You're right to keep working and trying.

that blows...I'm to hear about that. don't let it get you down though. keepit so that we'll have something to laugh at together when you get famous :D

Great blog. I awarded you The Quest Award as a new blogger on my Awards Created page @ CC-Chronicles.

Don't give up! You'll never get an acceptance letter if you quit, and that's a guarantee.

Thanks for all the great encouragement, guys! Don't worry, I won't give up! And neither should any of you.