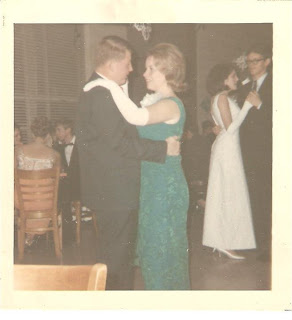 Today is my mom and dad's wedding anniversary. They were married in the spring of 1967, 43 years ago. After four decades of child rearing, moves, jobs, retirements, illnesses, vacations, joys, sorrows, and everything else the Universe can throw at you in such a span of time, they're still together, still leaning on each other and loving each other and showing me the value of perseverance in every action.

My parents were instrumental in my writing career. My father is an avid reader, and I taught myself to read at age 3 because I wanted to read books like my dad. My mother was an elementary school teacher with a masters' degree in reading education, so I'm sure that had something to do with it as well. I wrote my first "book" when I was four years old, and my mother still has it in her cedar chest. It was a little five-or-six page tome with a green construction paper cover, and it was all about leprechauns. I seem to remember one leprechaun lecturing the other about getting too excited about the upcoming St. Patrick's day ("Wait until it gets in the teens," the wise leprechaun said to his younger counterpart, "then we can start getting ready to party!"). I'm not sure when I wrote it, but it stands to reason that it was near the holiday, so... wow. Just realized, it was 30 years ago. Wow.

As I grew my mother fostered my love for reading by never taking away my books, ever, even for punishment. She just couldn't bring herself to do it. My parents bought me hundreds of books when I was a child, and I read them all over and over again. I took a book everywhere I went - school, road trips, out to eat - and neither of them told me to "put that book down". When I started writing short stories and poetry in middle school, Mom read every word with such enthusiasm, I had no choice but to write more.

They sent me to Governor's School in 1991 and again in 1993; they helped me get to college and prepare for the original monologue which got me a scholarship to Coker. They weren't pleased when I dropped out of college a year and a half later, but as always, they continued to love me and give me as much emotional support as they could. They put up with my mood swings and mental instabilities; they continued to love and accept me as I became an adult and made choices they didn't necessarily agree with.

When I moved to Indiana, they were doubtful of the course of action, but over the four years of my stay there (ha, typing it like that makes it sound like a prison sentence), they gradually warmed to the place, especially after seeing how well I was doing. When I moved back to SC, they were ecstatic.

A year after living in my little house off Augusta Street in Greenville, my dad came to me and said he wanted to help me in my quest to be a writer. "I'm not the artistic one," he told me. "But I can help sponsor some of what you need." He bought me the laptop I'm writing this blog post on after that conversation. Later on, a laser printer was added to the laptop, and he's going to help me go to some conventions later this year and next spring.

Mom has joined my Facebook fan page, reads my journal and Twitter, and passes my stories on to her friends, just as excited to read my words now as she was when I was a child. Her calm faith in God and unending well of love for me never ceases to amaze and move me. She's such an inspiration.

They were, and are, my biggest (not to mention first) fans. I love you, Mom and Dad. Happy Anniversary.
Posted by B. Miller at 12:06 PM

Aw, what awesome parents! Congrats to them. You are indeed blessed.

Awesome B. Congrats to them and wishing them many more happy years together.

What a beautiful tribute!

Congrats to them!
I love this post.
I love that you appreciate them...how lucky you are to have such supportive and loving parents.

Thanks for all your wonderful comments!

Yes, and what's even better is how much homage you pay to your parents in your book. The way you describe certain loving scenes and speak of them and how they influenced you, right down to specifics. You may be writing a horror novel, but it's a novel with a huge heart and a ton of compassion. I've loved how many times you've attributed it to your upbringing - and not just in regards to your love of books and writing, but to people in general.