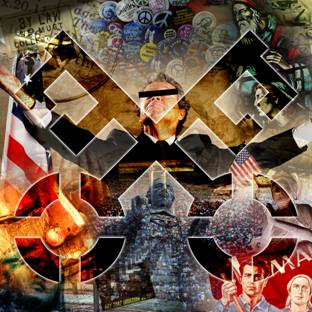 Today I'm listening to the album Black Ribbons, by Shooter Jennings and Hierophant. I found this album through a news article on MSN about musicians and writers collaborating on projects.

Shooter Jennings, the son of Waylon Jennings, plays a mix of rock and country that can't exactly be called rockabilly but still seriously rocks socks. Black Ribbons is an ambitious concept album and plays with a lot of different types of music and sounds. The thing that drew me to this album was the fact that Stephen King collaborated with the band on the project.

The album is set during an apocalyptic time for the human race in general and America specifically. The government is taking over airwaves and has eviscerated the concept of free speech. The country's last talk radio personality, Will O' The Wisp, is inviting his listeners to participate in one last night of free thinking and great music. Will is voiced by Stephen King himself, and he has several tracks on the album which he speaks on.

Shooter's concept for the radio DJ was less of a "Wolfman Jack" kind of personality and more of a thinking man's talk radio guy - "It was more the brain attached to the voice that was so important," he says in his interview with MSN. Stephen King fit the bill perfectly, especially since he was already a fan of Shooter's band. When Shooter contacted King about it, the writer was enthusiastic about the idea, but wasn't quite sure where Shooter wanted to go with it. Shooter sent him a couple of pages of notes, but wanted King to put his own flair on the album as well. Shooter says he was "open to him [King] writing the whole (narration) and I definitely didn't want to push my words on this guy, but I think he was looking for a little direction so I wrote a mock-up of what I believed it should be. He took that and doctored it and made it a hundred times better".

I love Stephen King and while I'm not familiar with Shooter Jennings's work (or I wasn't until today, anyway), I'm always open to giving new music a try. I've been listening to it at the Clark Kent job today and while I haven't been able to give it my whole attention for the entire time it's been playing, I like what I've heard so far. I plan to give it another listen when I can devote my full brain to what Shooter and Stephen King are saying.

Projects like this excite me. I'd love to do one with a band. I've been kicking around an idea inspired by the Murder By Death album Who Will Survive, and What Will Be Left of Them? for a while, but I want to finish the projects on my plate before I delve into anything else. It's an intriguing idea, though. I also love how much effort Shooter's put into making the album a full-sensory experience for his fans; he's put a lot of thought into how his website can be used with the apocalyptic concept. It's fun, if you get a chance it's worth a gander.

If you'd like to read the MSN article that turned me on to this album, go here.
Posted by B. Miller at 12:41 PM

I might have to check that out! King does like his rock 'n' roll. He's the one who picked AC/DC for the Max. Overdrive soundtrack. Yes, it was an awful movie, the music was great.

Indeed... he also plays rhythm guitar for a band called the Rock Bottom Remainders. They're a band made up of writers... Amy Tan and Matt Groenig are part of it too. :D

Ooh, that was a bad movie.

I am familiar with shooter, and with king's band, but didn't know about this project. I'll have to check it out.

Thank you so much for your kind comments on my blog.