A Fine Romance, With No Pages... 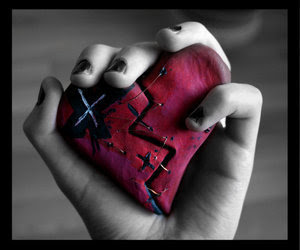 In that light, I'd like to admit to you, friend, THAT I SUCK AT WRITING ROMANCE.

It's not that I'm not a romantic person. I am! A hopeless romantic, sometimes. (Or, as Joan Wilder, the romance novelist, says in Romancing the Stone, "hopeFUL romantic". Hey, don't make fun of my referential movie choices, it was the eighties, and we all loved it, ok? I was only nine, after all.) I'm just more of a thriller/action/horror-type writer. Give me a lunatic with a dozen sharp objects or a murderous mud monster to throw at my characters any day, and I'll mop the floor with it. I'm great at description, grammar, language... but. But. BUT I just can't write the gooshy stuff of people falling in love. I feel cheesy and stilted and like I'm forcing the whole damn thing. I wish they'd just get it over with and get it on, because...

Sex! Sex is easy. Sex is action, with a little emotion thrown in. But to describe a person falling in love and make it seem real? Sigh. I've realized this about myself as I've come to the slight bit of romance in my book. My protagonist, Jack, has realized that he's fallen for his dead sister's best friend, Ashley. It's very important to the story that this happens, because I need to showcase how he feels to compare and contrast another character's actions and feelings... plus, it's important to me for the reader to like Jack, and be worried for him when he goes into a dangerous situation... and one of the best ways to form an emotional connection with someone is to read about how they're human, just like you, falling for someone, just like you probably have, and aren't sure how to deal with it... bingo, just like all of us do at one point or another in our lives.

The romance is minimalist right now, because I'm downplaying my weakness. I don't want to break the reader's illusion by forcing the love-and-romance angle and making it seem false. It's very tentative right now, very small. But it's there. And every time I get to it in the book part of me squirms. Get to the gore, my brain moans. Do we really have to concentrate on all this gooey love crap? it asks. And the answer is, YES, we do, brain, come on, let's get it down so we can get ON to the delicious murder of an unsuspecting redneck (who just happens to be one of the regular bowlers down at the Clark Kent job). It's important to the characters, the plot, the story, THE WHOLE DAMN THING. So quit your whining, will ya?

And I do. I pick it up and go and plug through the ooey-gooey bits as best I can. I'm getting better at it, I think... practice, practice, practice, right? I'm drawing on my own life and experiences for this, infusing my memories of adolescent awkwardness and emotional turmoil over falling for someone that I really shouldn't (because, come on, who hasn't felt that way at least once in their life) with Jack's sensibility and near-Eagle Scout mentality.

You're right on this one. I'm not a gooey romantic writer either -- it seems like my writing gets all cliched and trite. Hmmm --some of the romance writing I've seen looks that way. Maybe I'm better than I thought.

But like you say, you sometimes have to face it square on and practice to become better -- gotta have a little romance in our stories--well, usually.

I loved this post! Your personality really shines through. :o)

I do not write romance novels, BUT, I actually do love writing the love/romantic/relationship parts of my novels. I find them easy, and fun. The dialog as they are just starting to tip the scales into the scary vulnerable place...often overcome/compensated with humor, sarcasm, awkwardness. I love that stuff.

Just don't ask me to make all the time lines and subplots all line up. That is like a math problem ...and I hate math.

Yeah, we all have to work on our weak areas, the places we struggle.

It's important, I believe, to pick beta readers that are strong where you are weak. They'll spot your weaknesses and call you on them, and talk you through some suggestions for repair. (just my opinion)

I admit to shying away from romance, until a few months back I took the challenge Sherrinda issued a Kissing Day Blogfest. What a blast!

Keep plugging away it. Your characters will surprise you and take over when things get going anyway.

LOL! You just made me laugh out loud.
Have a female friend help you. Not that guys can't write this stuff, but women seem to do better.
BTW - I'd have a hard time with the sex stuff!

Me too. Part of the problem is I think I have a hard time creating characters who are actually going to be *concerned* about romance when the action gets going...

That's why I avoided that aspect in my book - there's no female characters anyway!

Since you loved Romancing the Stone, go back and watch it again and take notes. They didn't fall in love right away. They practically hated each other. Watch the give and take between the two, the slow journey to like, then respect, then love.

Great post; so very true. Most of us don't like working on things that don't come easily or that we don't think we can do well.

And I have to admit that I don't think I can write romance either. :)

I'm no writer but I can imagine, writing romantic stuff would be hard to pull off convincingly. Thanks for the comment on my blog and good luck with the romance.:)

I think I'm with you on this. Sex is easy but romance is hard.

Not my forte, nope.

B. Miller is one of the most hopeless romantics I know. So I find it hard you can't write romance scenes. It's so funny what out writer's minds are like compared to who we are as we walk around in the world. Try writing the scene in various ways. They are tough. And it is hard to avoid sounding like Hallmark. But if you look under the scene to the motivations of why your characters fall in love (more expose, sorry, it does help.) Our minds always relate our pleasures back to previous pleasures and needs so that's a starting point. As I say way too much - go in your character's heads. (I'm going to get a flogging at writers group Friday for saying that line again!)

Great post! I'm not a mushy gushy writer either, although I do love sparky chick lit with strong women! But straight-up romance? I love reading it, but writing... shudder.

Thanks for all your great comments and advice, you wonderful readers! I love hearing what all of you have to say... :D

I am with you there. I do not write romance and every time I try, they all end up killing each other. Oh well, that's why there are romance authors and people who are good at killing people...on paper. ;)