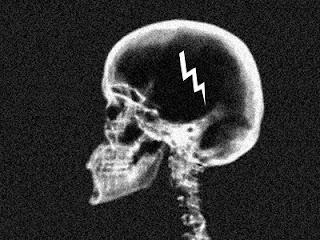 Story ideas come to me in some of the most inopportune places, as I've mentioned before in a blog entry or two. I'm learning my way around those obstacles, and now when inspiration hits me like a lightning bolt from a cool blue sky, I'm more prepared to take note and listen to what the universe has to say. I've developed a connection with my car that tiptoes along the border between quirky and obsessive... to me, it has its own personality, even its own name: Jeff. Yeah, Jeff. Jeff has his windows tinted, so I joke about how he wears his sunglasses at night. On long, rambling expeditions around the city of Greenville which stimulate the right side of my brain into giving up invaluable nuggets of inspiration, he's a good friend, and his own strange species of noble metal-and-fiberglass steed.

I often use the time I have in the car to allow my mind to wander wherever it wants to. On my way home from work or a friend's house, I'll take alternate, longer routes without even thinking about which way I'm going, just grooving along with the music pouring out of my speakers and digging the vibration of my rolling wheels. Sometimes my subconscious makes interesting connections about the characters and story I'm writing. More often, I'm able to get into the mindset of a character and get a feeling for how they think or speak or what their feelings or opinions are on situations in the story they live in. It's a time where I'm unplugged but still switched on, almost hypnotized by the dotted white line in the middle of the road and its predictable Morse code disappearing under my wheels.

Driving like this (almost exclusively at night) gives me a chance to mentally gnaw on whatever I'm working on, which these past few months has been the novel. I'm constantly thinking of Bulton, or my main characters (Dan, Jack, and Miss Mary are the most common thought-thieves), or how the different ribbons of storyline are slowly braiding together to make one long, strange, beautiful tale. There are no distractions, no books, cats, roommates, movies, games, websites to steal my focus and clutter up my artist's mind. Just me, my music, and the whispering pavement under my tires.

And then every so often, when I least expect it, the Universe sends me a big old special delivery package via the channels of my awake-yet-dreaming brain, and I'm so overcome with excitement I can barely contain myself. This is when the new toy of the voice recorder in my phone comes in handy. I used it just last night, to record an idea which made me so happy, I was dancing in the driver's seat (as much as it would allow, anyway). I was just driving along, not really thinking about anything in particular on the surface of my brain, just letting the boys in the basement of my subconscious fart around and mutter about whatever they wanted, and then there it was. An idea of such loveliness and artistic proportions I had to record it right away, before I forgot any of its nuances. I yanked my phone out of my pocket and babbled away for three minutes into its voice recorder. Once I got it all out onto the recording, I had that happy-yet-drained feeling I get after a brainstorming session... as if my mind is a muscle I've been exercising heavily and is now spent but rewarded with the feeling of a job well done.

When you're alone, and can let your mind wander, seems to be the best time for ideas to come. Usually for me, it's when I'm asleep. I wake up and write down the ideas or dreams quickly before they slide away.

This is a great post and love the graphic. What a fun meandering ride in Jeff, what with all your wonderful and quirky images and metaphors. Love "the boys int he basement." I need to take a ride with those guys.

I love breakthroughs. Mine are usually plot related, and frequently come to me while driving, as well. (I keep a notepad and pen with me at all times. I usually am writing something down at stoplights/signs.)

Hmmm, I don't think my razor has a voice recorder, but I have been known to call and leave myself a message on my home machine, when analog writing wasn't a safe option. But, I am due for a new cell phone, and my eye is on the Android. I'll have to check out the recorder possibilities.