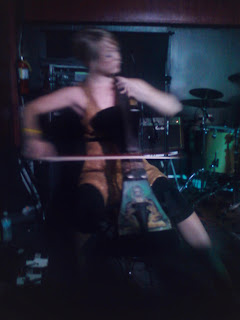 I went to see Murder By Death this weekend in Bloomington, IN. It was a fantastic show. The band is from Indiana, so there were a lot of die-hard fans in the crowd - but we got the prize for driving the farthest to see them. We hung with the band for just a bit, shared a bottle of Gentleman Jack with them during their set (they signed the bottle for me and it's on a shelf in my room now), and had a great time. The drummer, Dagan, hurt his hand last week, so they had a stripped-down acoustic session with their old organ/piano player Vincent (he's no longer with the band) added in to beef up the sound. They played a lot of old songs and some things I'd never heard before in concert. There were also three songs from the new album in the set list. Incredible!

I love live shows. There's something elemental and raw about being in the crowd, hearing music so loud it rattles your joints and presses against your eardrums. I get taken over by the music, and have to move and dance and express the passion I feel coursing through me as I listen to a band churn out their sound. This was fostered at a young age - my first live concert was Chicago, when I was five. I had the best seat in the house, because we saw them at a Carowinds show and I sat on my dad's shoulders for the whole set list.

My parents were live music enthusiasts, and during the decade of decadence that was the 80's they took my sister and I to over fifty live shows. I saw bands like Huey Lewis, Starship, The Eagles, and Genesis. We also went to solo acts such as Bruce Springsteen, Tina Turner, Michael Jackson, and Bob Seger. My mom was a pop music fanatic, and she took my sister and I to see Duran Duran and The Power Station and Madonna. Dad was more of a blues and rock lover, so he took us to see Eric Clapton, ZZ Top, and Styx. It was a great upbringing... I learned a lot about live music and fell in love with the energy and passion in concerts. Of course, in the early 90's concert tickets skyrocketed to ridiculous prices and we had to stop going for the most part, but it was fun while it lasted. I've been to a few big concerts in the last decade - Nine Inch Nails, the Indigo Girls, the Eels - but nothing like the summers in the 80's when my parents went nuts and bought tickets to everything coming to Atlanta.

Now I prefer small clubs or bars to large venues, not just because of the cost but also because I feel a much stronger connection to the band and the crowd when the show is smaller. Saturday night at the Bishop in Bloomington, it felt as if we were all part of the same organism, living and breathing and screaming along with the music. There was a current of power running through the crowd, fueled by the songs we loved and the band that thundered through their set on the stage above us. The bass from the speakers along the sides of the stage thrummed in my joints while the melodies of Sarah's cello strings reverberated in my chest. I felt charged, energized, more than just myself - I was part of the animal Crowd, and the animal was satisfied with Saturday night's offering. There's nothing else like that feeling in the world - you just don't get that kind of up-close and personal experience in a large venue like an arena.

Now, two days later, I feel recharged. I went to the river of energy fueled by live music and was fulfilled. I'm ready to jump into my story and pump out pages (as soon as I get home from the Clark Kent job tonight, of course). Murder By Death is coming to Atlanta in April, and I already have plans to go see them then too. I just can't resist that kind of rush.
Posted by B. Miller at 11:30 AM

I used to love going to live concerts. Back in the 70s you could see a concert with 3 major acts for $5 or $6. Now a night out here in L.A. will cost $100 or more and it's a big hassle with traffic and all.
I do like the smaller venues and if there were some closer to my house that weren't just Mexican music I might go every now and then.
Lee

I've seen a ton of band in concert, but ironically, none of those you mentioned. Guess I leaned more toward the hard rock bands.

Glad you had a good time. Nothing is more awesome than seeing a favorite band in concert.

Like you, I've enjoyed seeing lots of bands in large venues from Jimy Hendrix and Led Zeppelin to NIN. But while I was a music journalist in the 90's for the heavy metal,industrial, grunge and goth scene, I really came to enjoy the small venues - especially in smaller towns where the band actually comes out and talks to people afterwards. The Handlebar in Greenville is one of my favorites because they have a restaurant and the bands eat dinner there before their show and often talk to the patrons like we're all neighbors. I love the up close and personal feeling of seeing a live band on a small venue stage even if they're not a national act. I like seeing how much they enjoy what they're doing. And I have to say I'm jealous! Was that her cello? Cool as hell!

I'm jealous. I wish I'd been there with you guys, sounds like you had a blast!

Lee - it's the outrageous prices that made us stop going to big venues. Dad refuses to go now whenever his favorite bands come through. It just makes him mad.

Diane - I kinda tagged along with my parents. Maybe they kept the hard stuff to themselves? Hee...

Alex and Ben - thanks, my friends!

Gail - you're coming with us to the next MBD concert. Get used to the idea, as you don't have a choice. ;D

I'm so happy your road trip and music was energizing!

I too love small venues, but they are usually MORE expensive for the bands I like ( and sell out FAST). But they are more intimate and the sound quality is infinitely better.
(the last 2 [pricey!] small venue shows I saw was depeche mode in AC, and brand new in philly. both shows were perfection. i'd pay it again and again.)

Glad you're home safe and psyched to write!
~Lola